I recently made the jump from a Windows laptop to a Chromebook Pixel LS, a laptop that was ahead of its time. When the Pixel released, Chrome OS didn’t support Android apps through the Play Store, most chromebooks didn’t have touch screens, and the thought of paying upwards of $1300 for a machine that seemed like a glorified web browser with monster specs seemed absurd. Fortunately, things have changed since then! Chromebooks have become quite capable in the past few years - full Android app support coupled with the fact that most people don’t need more than a web browser to do their day-to-day computing has lead to Chrome OS being taken a little more seriously as a daily driver OS than before.

The Pixel does almost everything I need. I use Google Docs for all of my word processing, the Zoom Chrome app for my online courses, and I use the crosh shell for any dev work I need to do. I only missed using Microsoft’s Visual Studio Code as a text editor! I tried Crouton with Xiwi, which worked fine, but I noticed a substantial input delay that was especially noticeable when scrolling. I hear that VSCode works great on newer Chromebooks with Crostini, but the Pixel doesn’t support Crostini (yet) 😔

I stumbled across coder.com and thought that it could be a way for me to use VSCode without Crostini. It works, but the free tier is limited in its power and storage. I wanted to take advantage of the Pixel’s surprisingly good specs, so I took a look at their GitHub repository to see if there was any way that I could host it myself. Good news - I can! They included a binary in the repository that starts up a Coder server that you can access from localhost in a web browser.

I have a VPS set up on DigitalOcean that I use to run some web apps. My first idea was to set up the Coder server on my VPS and access the editor from Chrome. I ran the binary on the VPS, and immediately received an “out of memory” exception. Being the cheapskate that I am, I pay for the $5 a month VPS. Unfortunately, the Coder server won’t run on such a small amount of memory. Plus, Coder’s website gives you this option of running VSCode in the cloud anyway, so I decided to forget using self-hosting Coder for now.

Next, I tried just running code-server locally. After a little bit of fiddling, it works! I set up the server to run on one of my open ports and I’m able to access it easily through my browser. There’s a few glitches here and there; for example, I can’t view markdown previews in the app, and there’s a few extensions that don’t show up in the extensions search that do on normal installs of VSCode. All in all, though, it’s a great way for me to use my favorite text editor while I wait for some sort of official linux support for my device. 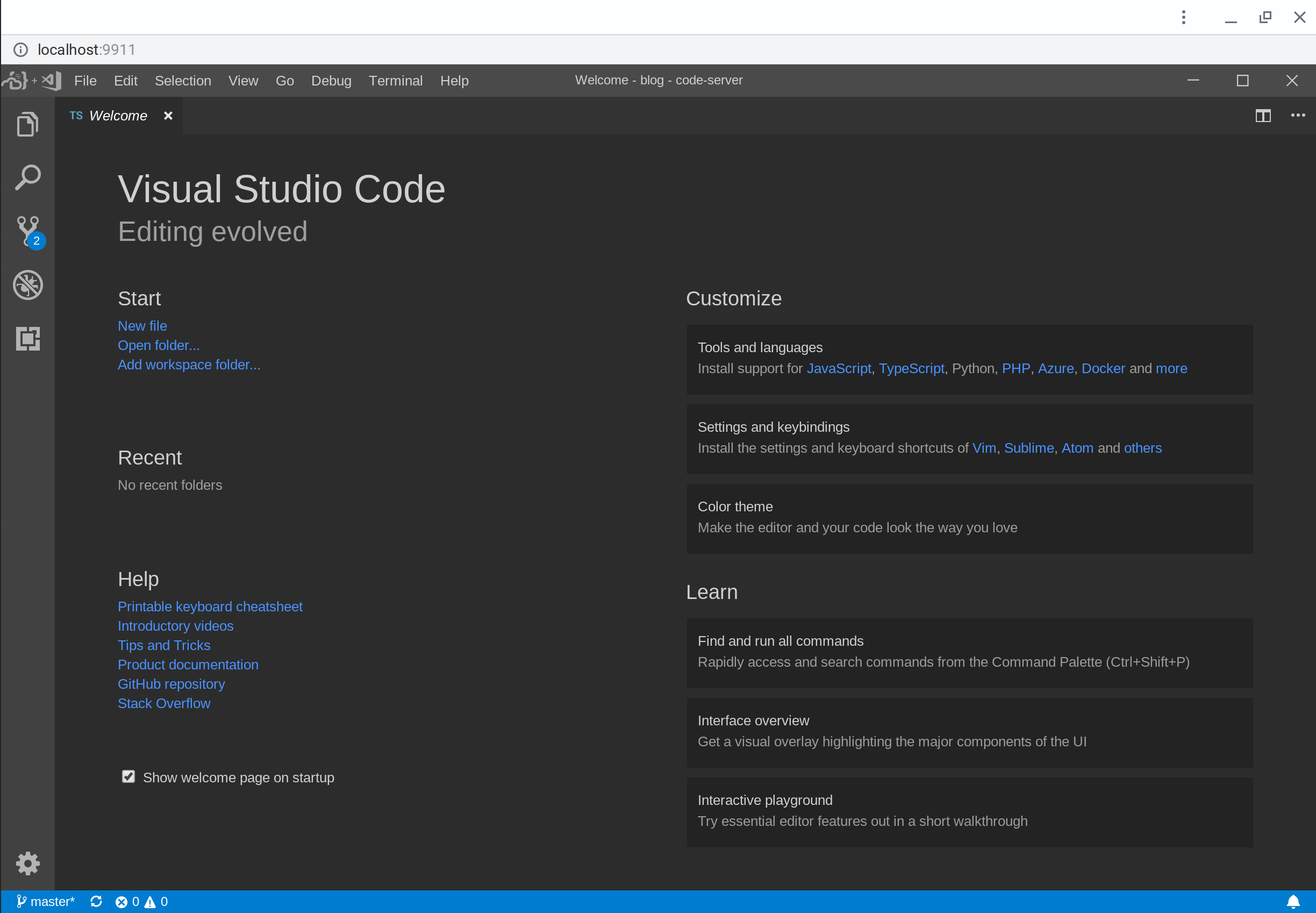 VSCode Running on my Chromebook

Some assumptions I’m making if you’re following this tutorial:

If you’ve made it this far, I want to thank you for reading through this little article. Thanks to Coder.com for making this nifty little server. If you have any questions, feel free to contact me via my website or via my email that I have posted on GitHub.